Kevin’s Kluge: Behind the Scenes at the Thrive! Conference Teen Game Night

The annual conference, our thirty-first, just concluded. It was an exciting experience with wonderful opportunities, as usual. There were lots of things I did during the conference that left an impression on me. It was great hearing and interacting with our speakers and also participating in the graduation ceremony. I could tell you about having dinner with Steve and Jane Lambert of Five in a Row and hearing Steve tell jokes. I then accidently became the butt of several jokes as I revealed to everyone at the table that I don’t know enough about how catered meals work. I could tell you about being interviewed by the Plaid Dads and being asked the Dr. Who question. This started a record-breaking run for me (eight times in three days) that I was asked some variation of, “Has anyone ever told you that you look like Dr. Who?” I struggled with creating equally varied and genuine responses to this question, from the simple: “Indeed,” to the more engaging, tailored for fans of the show, “Which one, David Tennant or Matt Smith?” I could tell you about waiting with the soon-to-be graduates after practice while their parents and loved ones were being seated, as I congratulated them and encouraged them to do great things and later taking a selfie with a sharply-dressed bow-tie wearing young man named Jackson. 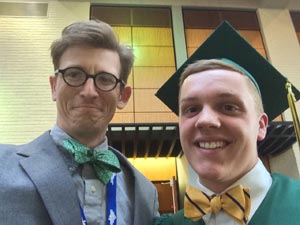 First, let it be known that I am an introvert. The word introvert conjures different images for different people, no doubt. Being an introvert does not mean you hate crowds or loud noises or don’t have the skills to mingle well with others. These are skills anyone can develop. An introvert is someone who finds being in groups exhausting and who recharges their battery in solitude. My favorite activity is a long walk. So when I told events director and conference chairperson, Debbie Mason, that as president and chief-servant of the organization that I was willing to do any conference job she needed help with, I am not sure which conference involving roughly 7000 people I was thinking about. And I certainly did not think she would take my words so literally and ask me to lead several hundred teenagers in an ice-breaking activity.

For some years, the conference has included a Teen and Alumni Game Social that provides an opportunity for the teens and alumni to socialize and relax (in non-introverted ways). During this conference it was Friday night from 9:30 to 11:00 p.m. in the Embassy Grand Pavilion. NCHE provides tons of board games, playing cards, etc., for the several hundred kids who typically break into smaller groups to play these games and socialize. However, it has been NCHE’s practice to start the games with an ice-breaker to help these young people meet each other. This year I was asked to lead the initial, crucial ice-breaking activity because, with million-winning-powerball kind of predictability, no sane person had volunteered for the job.

To be honest, I don’t know any large-group ice-breaking activities, and the Internet was not being friendly to my Googling. And I am a professional Googler—seriously, I am compensated monthly by a state institution to administer all things Googlely! But even my professional standing couldn’t hone my search for a decent large group game for teens. Instead my search only yielded things that sounded like fun to professional torturers and youth pastors. Most of the suggestions I could find involved doing things like forming long chains by holding hands or interacting with other people’s shoes. I asked my teenage sons if any of these ideas struck them as fun, and the faces they made told me anything involving holding hands or another person’s shoe was not going to fly. I asked Debbie what large scale ice-breaking things had been done in past. She told me about one time when she led a large-scale Pictionary-type game. According to her, it was fun, but cheating became rampant. I wasn’t there, but I can only imagine. I am tempted to cheat any time I play any game involving doodling, simply because I cannot draw and find most people with whom I am playing don’t know how to draw either. So, I’m not sure what happened in the past, and it’s not my place to judge; I just knew that the ideas that were before me sounded more like “Teen Lame Night.” I was determined to do a better job than past ice-breaker Teen Game Night leaders, so I did what every other leader does—I ignored the problem and procrastinated.

At 9:00 p.m. I found myself in the Grand Pavilion, a room organized with about thirty round tables each seating at least ten. There were about thirty board games spread out on the stage. In about thirty minutes, several hundred teens were going to be walking through the door, excited and ready to play games. I had one idea: some variation of the game of Spoons. I learned this game as a teen, and I have always loved it. About a dozen teens showed up early, and so I quickly recruited them to play this game with me to see if maybe it could work on a large scale. For the uninitiated, Spoons is like Musical Chairs, except instead of music, you use playing cards, and instead of chairs, you use spoons. The goal is to avoid being the person in the end without a spoon. I explained this game quickly, and the dozen kids played it twice. They seemed to enjoy it, but I instantly knew it wouldn’t scale. In addition, there is not a lot of ice-breaking going on with the game. I knew it wasn’t going to work.

It was then about 9:25 p.m., and I understood that I was in trouble. Several hundred teens were going to be there any second, and the only thing between them and the game of their choice was going to be one leader requiring them to participate in large group ice-breaking activity. I imagined their cold stares if I tried to encourage them to hold hands or another person’s shoe, and I longed for my own time machine into which I could escape. Times like these form and shape a homeschool leader and cause him or her to wisely use what assets they have so that they can be an example to others. In this particular case, my second-born son was my asset.

My fourteen-year-old son and I literally made up a game in four minutes. My son’s initials are ATM, and he sometimes jokes that his name is “Automatic Teller Machine.” So starting with his name, he and I generated two alternative names with those initials to go along with his true name. I wrote all three names on a whiteboard. When the kids arrived, they were excited. My son and I were on the stage with my whiteboard. I introduced my son without saying his name; then I showed them the three names I’d written. I polled the room and asked the room to guess which one was my son’s real name. Incredibly, the whole room seemed to get into it, and in the end, voted for one of the legitimate sounding fabrications. When they were told the real name, I could hear throughout the room teens laughing and saying to each other that was what they were really thinking (oh sure, like I believe that!). I then told the teens to do the same thing with the kids at the tables where they were seated. If they already knew a person, they could recuse themselves on that person’s turn. If they wanted to change tables really quickly, they could. I sat down at one table with about ten young ladies. Together we played the game for about twenty minutes, and I was most delightfully deceived by some ingenious fabrications three times. I tell you this because I am confident this thing has potential to shake up the large group ice-breaking market. I will soon be patenting this game and am already exploring options for a website address. Sadly, TheInitialGame.com is already taken but MyNameIsNotAutomaticTellerMachine.com is still up for grabs.

Afterwards, I walked about the room and saw kids playing board and card games. Some teens were not sitting, but were standing and playing more physical games. Some were playing a very strange game that looked like a combination of underwater ballet or slow-motion fighting. I learned it was a game called Ninja in which everyone in a circle formed a Ninja stance and took turns making a single move in which the goal was to slap another person’s hand. You could only initiate a move if it was your turn or move in a reactionary way if someone else moved to attack you. I played a few rounds of this game and had a lot of fun. I was not very good at it. However, I’ve been recently reassessing some personal goals. I think mastering Ninja might be one worth pursuing. Don’t be surprised if at next year’s conference, I get introduced as Kevin McClain, Game Originator, Ninja Master and NCHE president.

So, in conclusion, I consider the Teen Game Night a success. I saw kids having fun, interacting and making friends. This year we renamed the annual conference. We call it Thrive! because that is our vision for families of North Carolina. However, when the conference committee voted on the name, I doubt they imagined that that included the idea of a group of teenagers being a pilot for a future-award winning game—which just goes to show that part of thriving is being full of surprises.