The decision to homeschool involves commitment, sacrifice and dedication. It requires commitment of financial resources for educational and curricula materials and time for preparation and for working with your children. You will, most likely, be different from most of your friends and neighbors. So, why would you consider doing this? What are the advantages of home education? There are many reasons, but here are ten:

Educators have estimated that in one and one-half to two hours a tutor can cover the same material that classroom teaching takes a whole day to cover. With home education you can give your child the precious gift of time! Time to play, to read, to draw, to observe nature, to do a project, to sing or play an instrument, to be involved with a service project, to run a cottage industry, to develop relationships and to pursue their interests.

3. The homeschool can be tailored to fit your child’s maturity and learning styles. 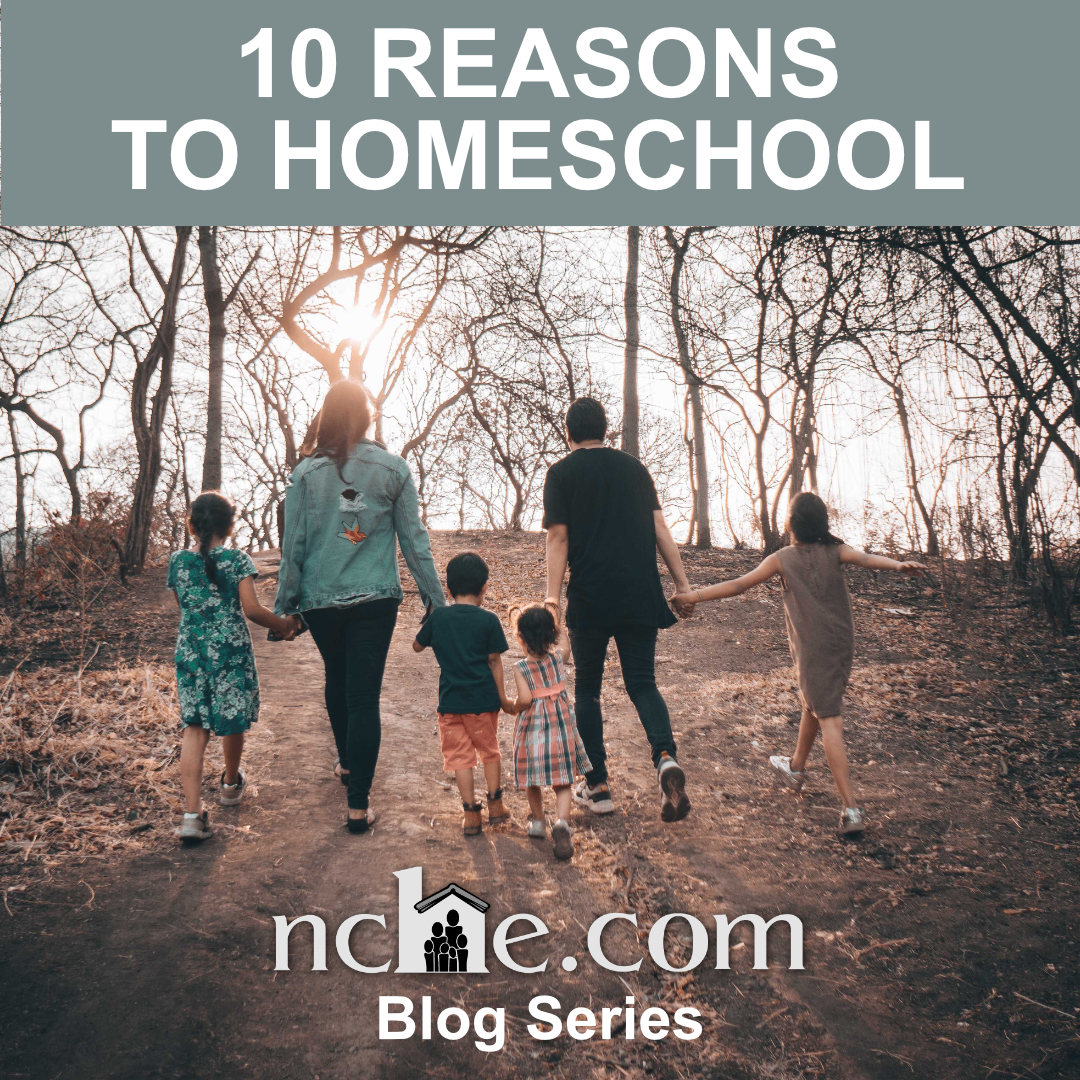 Rather than your child having to fit into a graded education system, your school can be molded to fit your child’s needs. Several government funded studies in the 1920s and 1930s showed that classroom instruction and book work that requires abstract reasoning were not the most effective way to educate children nine to ten year-olds or younger. Over 7,000 early childhood studies compiled in the 1970s by Raymond and Dorothy Moore at the Hewitt Research Foundation confirmed the findings of the earlier studies. Their studies showed that many children, especially young boys, were not physically, neurologically or emotionally mature enough to handle structured classroom teaching. Information about these studies may be found in School Can Wait by Raymond and Dorothy Moore.

In home education, a child has the opportunity to develop mentally and physically before he is exposed to structured bookwork. Also, in areas where the child excels, the homeschool can permit the child to learn as quickly as his ability and interest will allow.

The classroom experience encourages group thinking, whereas homeschooling encourages independent thinking. Homeschool students are given the freedom and even encouragement to chase what a classroom teacher would call “rabbit trails.” Many of these excursions result in the deeper understanding of the subject. Because homeschoolers are protected from negative criticism when they explore their creative pursuits, their creativity is not stifled. Why is this important? As we are created in the image of God, we are designed to be creative ourselves. Our world needs leaders with ingenuity and creativity.

Dr Lawrence Williams, Virginia Institute of Technology – 1990 – “The average scores of home schooled children on the Figural Form of the Torrance Tests of Creative Thinking (TTCT) were significantly higher than the national norms on three out of five subscales and the global mean of the TTCT. Since the norms for the TTCT were derived from the scores of children in conventional schools, Dr. Williams’ results provide the first solid evidence that homeschooled children are more creative than their conventionally schooled peers.”

“A factor analysis of the parents’ responses to questions about their instructional approach revealed four factors that were significant components of producing creative children. 1) the parents provided their children with freedom to learn on their own, 2) encouraged intrinsic motivation in their children, 3) utilized a more unstructured approach, and 4) focused upon learning as a process, rather than a goal.”

Williams reports that “over 80% of the parents taught no more than three hours daily, 91% indicated they believed early formal learning was not important, and 69% said they used home-made materials frequently in the learning process.”

In 1989, Dr. Sam Peavey, Professor Emeritus, University of Louisville, Kentucky, stated, “The best preparation for real life is to live it every day as home scholars do. It is the institutionalized student in the regular school who is compelled to live in an unreal setting.” For example, children can learn math in the kitchen, workshop, and supermarket. This makes math more meaningful and more useful to them. Home education brings with it a natural development of life skills that are not a part of the traditional classroom curriculum.

6. Parents are the most effective agents for the positive socialization of children.

Children attain confidence and independent thinking when their exposure to peer pressure is reduced and interaction with their parents is increased. Home-educated children learn social behavior from their parents instead of from other children. Also, because homeschooled children typically have contact with a wide range of people, they can better relate to people of different ages and different backgrounds.

7. Parents have freedom to choose what their child is taught, and when and how it is taught.

There are many things to be taught and different methods to teach. When educating at home, a parent has greater flexible in changing the content and methods of educating to suit the child and the family.  Christians believe that parents are ultimately responsible for the education of a child.  In order to fulfill this responsibility, parents must have the freedom to tailor instruction to the child.  This principle is clear in Christian teaching when fathers are commanded not to goad or exasperate their children in the educational process.

Ephesians 6:4 “You fathers, again, must not goad your children to resentment, but give them the instruction and correction, which belong to a Christian upbringing.” (New English Bible)

If one method of educating vexes the child, the parent should change the method of instruction to one that is more productive. This shift in instructional method is more easily accomplished in a homeschool setting.

Different views exist over which things should be taught.  The Christian faith requires parents to teach their children about God.

Deuteronomy 6:4-7 “Hear, O Israel, the Lord is our God, one Lord, and you must love the Lord your God with all your heart and soul and strength. These commandments which I give you this day are to be kept in your heart; you shall repeat them to your sons, and speak of them indoors and out of doors, when you lie down and when you rise.” (New English Bible)

Home education empowers parents to pass their values and their worldview to their children without undue interference from those who do not share their views.

8. Home education can be planned around the family’s schedule.

Homeschool does not have to be scheduled during normal school hours. Many home educators have educational activities during the evening hours when both parents can be involved. Occasionally, my family accompanies me on a business trip. For them, it is a field trip. Learning opportunities can happen at any time of the day, and the experienced home educator will recognize these opportunities and take advantage of them.

9. Home education provides a vehicle for strengthening the family.

Typical homeschool families experience greater closeness, deeper commitment to one another and more open communications. Our family has enjoyed learning together through reading, projects, sports, the arts and spiritual development. Children feel secure enough with their parents to be open about such issues as dating, sex, drugs, gossip and other sensitive, but important issues.

10. Parents learn with their children.

An unexpected by-product of home education has been that the parent has an opportunity to learn with the children. The homeschool parent often has a greater understanding of history, politics, science, geography, and other subjects as a result of the home education process.