In the spring of 1985, a significant victory took place in the long legal fight over home education in North Carolina. The North Carolina State Supreme Court ruled that under the current private school law, parents were allowed to educate their children at home.

Prior to this ruling, in some areas of the state, compulsory school attendance laws were being used to prosecute parents for teaching their children at home. The judgment in Delconte v. North Carolina reversed a lower court ruling and declared homeschooling legal. The 1985-86 school year was the first in which single-family homeschools were officially recognized as non-public schools in North Carolina.

Kevin McClain, president of NCHE and father of six homeschooled children said that NCHE is celebrating this milestone by remembering some of the early pioneers in home education in North Carolina.

Spencer and Debbie Mason were homeschooling parents in those early days. They decided to move to NC during the time this court case was being waged. The difficulty of homeschooling in NC at the time made this a hard decision. However, because their oldest was not yet five, they knew that it would be a couple of years before they fell under the compulsory attendance law. They hoped and prayed that the law would change before their daughter turned seven. They felt strongly that God wanted them in NC. As it turned out, they were still in the process of moving into NC when they heard on the news about the Delconte case win. Today they continue to support homeschooling by serving on the board of NCHE.

Like many parents they believed that homeschooling was a great alternative to the traditional, institutional schools, or even programs for the young such as mothers-morning-out. Their oldest was almost one when they first heard about homeschooling through news of a homeschooling family that was being taken to court. At first, Spencer thought it was a great idea, Debbie not so much. In the beginning, their main reasons focused on encouraging a love of learning in their children, allowing them to experience an individual education based on their interests and development and avoiding peer pressure, especially in the young years. As with many homeschoolers in those early days, the goal was to homeschool until the age of between eight and ten, but as those years approached, they fell in love with the process and decided to keep homeschooling.

Debbie Mason recalls that there was a lot of anxiety and concern in those early years when parents could be arrested for educating their children at home. “Before homeschooling was clearly legal, we had devised a plan that if my husband Spencer was arrested, I would take the children and flee to Tennessee where the grandparents lived.” Other homeschooling families had similar contingency plans. Before the Delconte case decision, there were several families who were arrested because of homeschooling. While the threat of arrest was removed, it has not all been smooth sailing since 1985. As can be imagined, not everyone was happy with the Delconte decision, especially the NC Department of Public Instruction. Jumping off from a suggestion in the ruling itself, opponents sought to change the law to put heavy restrictions on homeschoolers. A hard-fought battle took place during the 1987-88 legislative sessions. NCHE rose to the occasion, rallied the troops and won a victory that gave us one of the best homeschool laws in the US.

Banner picture: Spencer and Debbie Mason with their four children in the early years of their homeschool journey

The Mason’s four children now grown include two married daughters (one is a homeschool mom with four children), an attorney and a computer engineer. “It was risky when we made the decision to homeschool in NC, but I am so glad that we did. The homeschooling life was a great life, and NC turned out to be a wonderful place to homeschool. I am really proud of our kids and the lives they are leading,” Mason said. 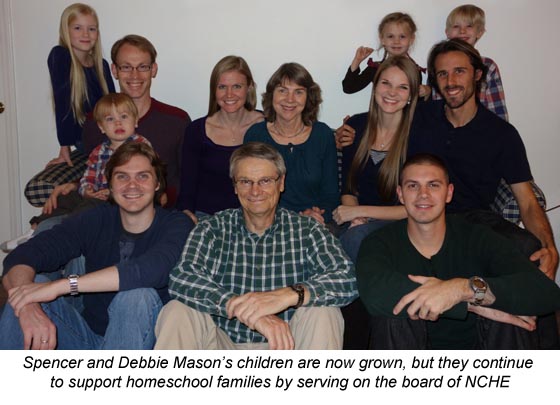 McClain says that the Masons were true pioneers in an educational movement that has become incredibly successful. “The generation before us did the heavy lifting that made the many homeschool opportunities possible that we enjoy today,” said McClain.

According to the North Carolina Division of Non-Public Education (DNPE), after the NC Supreme Court decision there were 381 individual homeschools. Today they report that more than 70,000 NC homeschools. 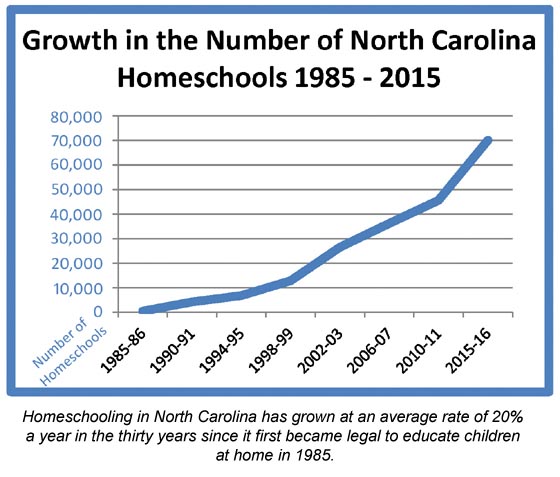 McClain who has led NCHE for the past three years describes the growth of home education as phenomenal. He explains that the focus of their organization has become broader in order to meet the needs of the growing homeschooling population. “Our goals at NCHE today include more than just keeping homeschooling legal but ensuring that we have a robust environment where home education is celebrated and continues to thrive. We provide a variety of services that include helping families to get started with home education for the first time, providing homeschool sports leagues and holding an annual conference that draws more than 7,000 people every year.”

To learn more about NCHE and homeschooling in North Carolina, visit the NCHE website at NCHE.com or email them at NCHE@NCHE.com.

Brian Gilpin and his wife, Kirsty, have been homeschooling their two children since 2009. He has a BS in journalism from the University of Kansas and an MS in management from the University of Maryland University College. He works as the CRM manager for Classical Conversations and joined the NCHE board in 2014, currently serving as marketing director.