Patrick Goetze (pronounced Getz), son of Kenny and Debra Goetze of Zebulon, NC, signed a professional contract with the Boston Red Sox in early July. He had previously signed a National Letter of Intent with Louisburg College. After receiving the professional offer, he decided that to accept the contract 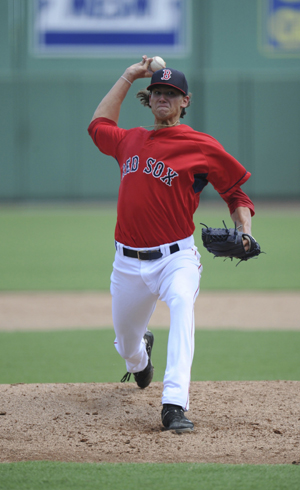 was what the Lord would have him to do. For this 6’6”, 200 lb. prospect who throws comfortably in the low 90s, it was not a matter of ease getting to this point. In March of 2012, he had to undergo Tommy John surgery (named for the first professional pitcher to ever return to the big leagues after having surgery for ulnar collateral ligament replacement).

When asked what he thought about homeschooling, he replied, “I loved the whole homeschool concept about being around my mother, father, brothers and sister. Homeschooling helped get me to where I am today.” He also related, “The flexibility of homeschooling allowed me to work out with major leaguer Josh Hamilton and to train with pitching coach Mike Caldwell. If I were in school, I might not have been able to work that into my schedule with school and team practices.”

During his senior season, he helped lead his homeschool Wake County Warriors to their second consecutive second place finish at the Homeschool World Series, and he participated in the NCHE Athletic Commission spring season where they won the state championship this year. His personal statistics this year were a 6-1 record with an ERA (earned run average) of 0.69 earned runs per game. His pitching coach, Robert Stephenson, assessed his pitching abilities in the following manner:

“He throws both two and four-seam fastballs, both of which run in on the hands of right-handed hitters. He throws from a low three-quarter-arm angle, which creates deception to the batter and gives his pitches exceptional movement. Pat also has good command of his breaking ball and change-up and will throw these off-speed pitches on almost any count. Because his delivery doesn’t change from pitch to pitch, right-handed batters don’t know if the ball is going to run in on their hands or break toward the outside corner.”

When his coach, Warren Harvey, was asked about him, he said, “He is just a great kid and has kept everything in perspective. He dealt with adversity with injuries and through all of that, he didn’t allow it to keep him from pursuing his goals.” Further, he added, “Patrick never missed a practice or game while he was injured and helped motivate his teammates.”

Participating with Purpose Driven Baseball, a showcase team out of Clayton, NC, benefitted his recruiting process. He also received exposure when his homeschool team played in the Homeschool World Series and tournaments such as the Bobby Murray Tournament where they played teams including East Wake, Fuquay-Varina, Millbrook, Northeast Guilford. He was evaluated by a scout for Major League Baseball and, in turn, he received interest from the Angels, Blue Jays, Braves, Pirates, Red Sox, Royals and White Sox (several of which visited him at his home).

Because shoulder pain in his right arm has slightly limited his pitching time this spring, the Red Sox have had him in rehabilitation at their training facility in Fort Myers, Florida. He was just recently released to pitching in competition, and he pitched one inning in a Gulf Coast League game on August 14 where he retired two of three batters faced without giving up a walk or hit on seven pitches. He will continue in the Gulf Coast League, which is a rookie league, and hopes to participate in the fall instructional league.

Ernie Hodges and his wife, Iris, served on the NCHE board for twenty years and homeschooled their three children from birth through their college days and are now actively teaching life skills to their five grandchildren. Ernie is the state commissioner for the NCHE Athletic Commission and administrates the North Carolina Homeschool Leagues and post season tournaments in baseball, boys/girls basketball, boys/girls soccer, volleyball, girls, golf, cross country and swimming. He is a strong proponent of homeschoolers obtaining scholarships to continue their athletics in college as well.