Hear the captivating story of twin brothers, David and Jason Benham, as they lost their HGTV reality television show for standing up for biblical principles. Their story will inspire and encourage you to stand up for what is right. 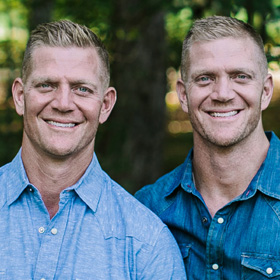 David and Jason Benham, twin brothers, are former professional baseball players, bestselling authors, speakers and nationally acclaimed entrepreneurs. Their professional accomplishments have been recognized by dozens of publications, including Inc Magazine, Wall St Journal, Business Leader Media and Franchise 500. Their success earned them a reality show with HGTV that was set to air in the fall of 2014—yet the show was abruptly cancelled because of their commitment to biblical values. Appearing on Fox News, ESPN, CNN, Fox Business, ABC's Nightline and Good Morning America, the Benhams continue to stand up for what they believe and encourage others to do the same. As authors of Whatever the Cost and Living among Lions, David and Jason share their story along with biblical principles that will revolutionize your work and family life while giving you the courage to stand up for what is right. The brothers are happily married with a combined nine children and live in Charlotte, NC.