What state can claim (arguably) the earliest battle in the American Revolution and one of the decisive last battles? Which can claim a tea party organized by leading women and an early forerunner of the Declaration of Independence? Massachusetts? Pennsylvania? New York? Virginia? No! North Carolina!

We’ve all heard about the 1775 “Shot Heard Round the World” in Lexington, MA, but have you heard about the Battle of Alamance, NC, in 1771? While the Boston Tea Party threw tea into the harbor in 1773, the Edenton, NC, tea party petition was signed by fifty-one leading women of the town. They promised to no longer buy British goods, even to the detriment of their family businesses. The controversial Mecklenburg, NC, Declaration predated the Declaration of Independence by over a year. The battle at the Guilford County, NC, Courthouse forced British General Cornwallis to head to the coast and on to Yorktown VA, where he surrendered. All of these are part of our North Carolina heritage and history. All of these are places and things you can visit or research. And the more you look, the more you discover! 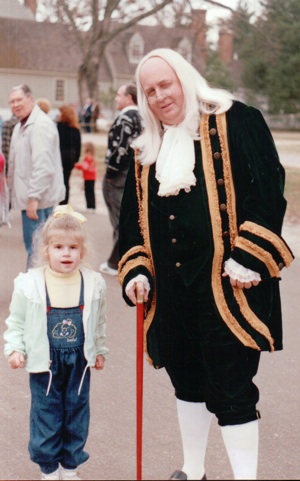 On one of the Henderson’s early field trips,
daughter Andrea meets Ben Franklin.

It’s one thing to read about events that happened over two hundred years ago, but it is another thing to experience history. Field trips to historical sites provide unique opportunities for students to experience living history. No matter where you live in North Carolina, you are close to a place where the War for Independence was fought!

The more young people see, hear, touch, smell and maybe even taste an historically accurate representation of artifacts, the more the reality of what once happened will take form in their mind. The more they walk the ground others have walked and stand beside a similar hearth, the more appreciation they will have for the trials and temptations others had to endure. There is no doubt that experiential learning takes a good deal of effort, a great deal of intentionality and planning. It is much easier just to do a unit study about the American Revolution at home. However, one of the benefits of homeschooling is scheduling flexibility. You can do school on a weekend. You can incorporate other educational work into the drive. Incorporating history field trips into the curriculum is important, and homeschooling provides a unique opportunity to do so.

A field trip to a historical site should be filled with great learning opportunities. Here are some tips to make the most of the experience.

What follows is a list of North Carolina Revolutionary sites that I highly recommend. It is by no means a comprehensible list. Some I’ve visited and really enjoyed, others are still on my list to visit. There is no use trying to rank them, for they are unique and each has its own value; some are comprehensive and might require multiple visits to take in all they have to offer, others are small and more intimate. All of these sites are within a reasonable drive from just about anywhere in North Carolina. While some are run by the National Park Service, many are run by the state. Some are very much a local/volunteer venture. Some have fees associated with them. All are worth the time and effort to go and visit. I’ve grouped them geographically and provided some historical context. For more context, I recommend some of the amazing history sites online dedicated to North Carolina and/or the Revolutionary War:

Have you been to Tryon Palace? It was built by a tyrannical British governor during his reign 1765-1771. His tax officials would confiscate horses and tack, or all important cooking pots if colonists were not able to pay. The colonists saw the need for regulation of these government officials hence the rebels formed the Regulators. Refusal to pay the taxes led to the showdown in 1771 at Alamance Battlefield. The Regulators were defeated and leaders hung. But this was arguably the first confrontation of the American War for Independence. Today, both Tryon Palace near New Bern and Alamance Battlefield outside of Burlington are the first of the locations you should visit to follow the war through the state.

North Carolina colonists were pretty evenly divided between Loyalists, Patriots and those who did not want war. In the years leading up to the War of the Regulators, the Great Awakening swept through the colonies. The Wesleys, George Whitefield and others inspired circuit riders and tent meetings.

Baptists, Methodists, Presbyterians, Moravians and Quakers took root and grew in North Carolina. With them came varied theologies. Some emphasized personal salvation, individual freedom and duty to God and fellow man. With it came the dethroning of the King as the source of law. The cry of “No King but King Jesus!” was heard.

Other theologies honored the authority of the Anglican Church and the King and were naturally called the Loyalists.

Still others would not, no, could not pick up a weapon against their fellow man. Remnants of their settlements and meetings last to this day. You can visit the Quaker settlement of Snow Camp during the summer and see the reasons why they would not fight in the outdoor play The Sword of Peace.

In other parts of the Colonies and in North Carolina, tensions were rising. News traveled across the land of the Boston Tea Party in 1773, spawning other tea parties in many other cities. Visit Edenton to learn more about Mrs. Penelope Barker and the agreement to boycott British goods she signed in the fall of 1774 with fifty other leading women.

Feb 27, 1775—At the Bridge over Widow Moore’s Creek twenty miles from Wilmington, Whigs (Patriots) blocked the way for a larger group of Tories (Loyalists) marching to Brunswick Town on the Cape Fear River to join up with General Cornwallis. The Patriots demonstrated surprising strength, discouraging Loyalists from recruiting more.

Now we’re off to Charlotte to discover the controversial Mecklenburg Declaration. Soon after Lexington/Concord in 1775, residents of the county declared themselves “a free and independent people.” There is controversy amongst historians as to whether or not the Mecklenburg Declaration is authentic. Did the residents really write it in 1775, or was it produced later and post-dated? You need to research and decide.

Confirmed to be authentic are the Mecklenburg May 31, 1775 Resolves, twenty resolutions declaring “laws…derived from the Authority of the King or Parliament are annulled and vacated…” It outlined how to replace the Crown government with local.

It was not until a year later with the Halifax Resolves of April 12, 1776, that North Carolina authorized its representatives to the Continental Congress to vote for independence from Britain.

Back to the west, the far west, Indians were divided; Cherokees joined up with the British, Catawba with the Patriots. Battles were fought near Franklin near Coweecho River gorge called the block hole.

You can explore a Timeline of North Carolina Battles/Skirmishes to find local conflicts near you.

In 1780, war escalated in North Carolina. With British General Ferguson and an army of Loyalists headed towards Kings Mountain, frontiersmen gathered together and rode south to meet them. Along the way more men joined in until the group grew 900-1000 strong. This march is reenacted by the Overmountain Men.

The Overmountain Men caught up with Ferguson and his Loyalist troops at Kings Mountain—oops!—SC. You’ll have to go slightly out of state to visit this important battle! Because of the outcome, General Cornwallis planned to advance into North Carolina from his camp in Charlotte. The battle’s anniversary is Oct 7, 1780.

By this time, General Greene was put in charge of the Continentals in North Carolina. He extended the use of hit and run attacks, using light horse cavalry to harass and destroy supplies behind the British/Loyalist army and take out bridges and boats in front of them. General Greene outpaced Cornwallis all the way to the Dan River in Virginia. This is a short out of state trip to South Boston, VA.  Greene took all boats across the Dan, stranding Cornwallis on the south bank. The British turned to Loyalist stronghold of Hillsborough.

After both armies took time to refit, Greene and the Patriot Regulars and Militias returned to Guilford County Courthouse, in the middle of present day Greensboro. I won’t spoil your visit by revealing all that went on there. It is a National Military Park, and they have a well-run Museum with exhibits, a short movie, an interactive map and a well stocked bookstore/gift shop with something for everyone. There is a great trail through the park with preserved battle lines and explanations of the events.

After this battle, Cornwallis headed to Wilmington. This was the path of least resistance, not large rivers to cross like the Dan, and from there he went to Yorktown, VA. And you know the rest! By October 19, 1781, most of the hostilities were finished.

There is no way I could find all of the many sites in North Carolina related to the American War for Independence. If, in your travels or web searches you run across a less-visited site of historic significance, send us a note to history@nche.com.

Dave Henderson is the father of a homeschool graduate (since kindergarten). Until he started homeschooling, he thought history started in 1492. Now he realizes it is His Story that started before Creation. Dave is NCHE region 8 director. He transplanted twenty-two years ago from the Midwest to North Carolina. (Go East, young man)