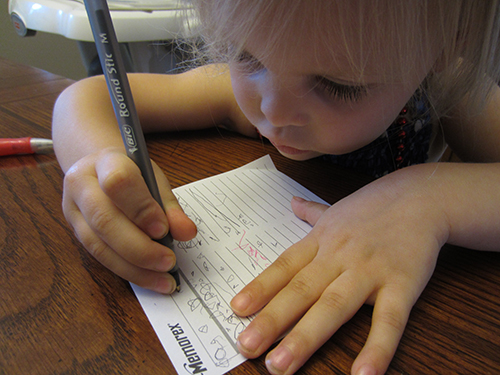 When I decided to homeschool many years ago, I had one child who wasn’t even one year old. One of the benefits of homeschooling that drew me the most was that I could individualize her education. This was such an exciting idea. I could mold her education around her developmental stages and interests. I could keep her from being forced to read before she was ready to perform this skill. I could meet her where she was and guide her at her own pace. Of course, with just a baby, I knew that it would be a long time before I could really “do school.” Before then, I could create an environment that would encourage and stimulate her to grow and thrive at her natural pace. I came to realize that life is school in the real sense of the word. Young children are always learning.

There are two main aspects to individualizing their learning. One is readiness learning and the other is molding their education around their interests, strengths, weaknesses and future plans.

Early on, I became a believer in what we called delayed academics or readiness learning, which basically meant that most young children are not developmentally ready to do formal academics. If they are forced to perform academic skills before they are ready, it can cause harm to brain development and attitudes toward learning. However, when they are ready, they can soar. Homeschooling would allow them to go as fast as they could without being held back.

As an education major, I was chomping at the bit to “do school.” I just couldn’t wait to pull out the math and phonics books, but I forced myself to wait until she was ready. However, I do admit testing the waters often (which is a good thing to do). Was she ready yet? Eventually she was; they all were. I ended up having 4 kids. One of them read pretty late. He was 9 or 10 when he started to read. I admit that I was getting worried, but it did happen! And by the way, he is now a lawyer.

Another story of how homeschooling allowed me to individualize the education of my oldest daughter has to do with math. This daughter always loved math. When she was a preschooler, she would beg me for math workbooks. I would parcel the pages out like they were candy. Not only did she love math, she always showed a giftedness for it too. But something changed around the fifth grade; she began to hate math. I knew that I had a problem here. I had to do something to turn this around. So, I took a year off from her “doing math.” I didn’t completely stop; I had her do a bit of math review each week. Two things happened the next year that changed her attitude about math. The biggest one was that she started MathCounts, a middle school math competition. The other was that I changed her math curriculum. The one that she had been doing just wasn’t good for her; mainly, it was boring. Because of homeschooling, I had the freedom to change the math plan to work it around her. This daughter did go on to major in math in college, and she is now a homeschool mother and coaches MathCounts.

When my son, the late reader, was in the tenth grade, his interests were all over the place, and we really didn’t know what path he would take in college and for his future. He had an interest in architecture, so we thought we would pursue that interest by signing him up for a design class at the community college. Well, that didn’t work out too well. He struggled in that class more than we expected he would. From this experience, we started doubting that architecture was his path. At the beginning of the eleventh grade, he started debate, and he loved it. This was indicative of his path. He went on to do pre-law in college, and as I have already said, he is now a lawyer.

Each child has their own unique developmental path, giftedness, interests and callings in life. Their education should be as unique as they are. In homeschooling, you have the freedom to mold their education around them, not some predetermined plan that is supposed to be a one-size-fits-all. The homeschool laws in North Carolina allow for this freedom. I encourage you to take advantage of it.