The Math around You 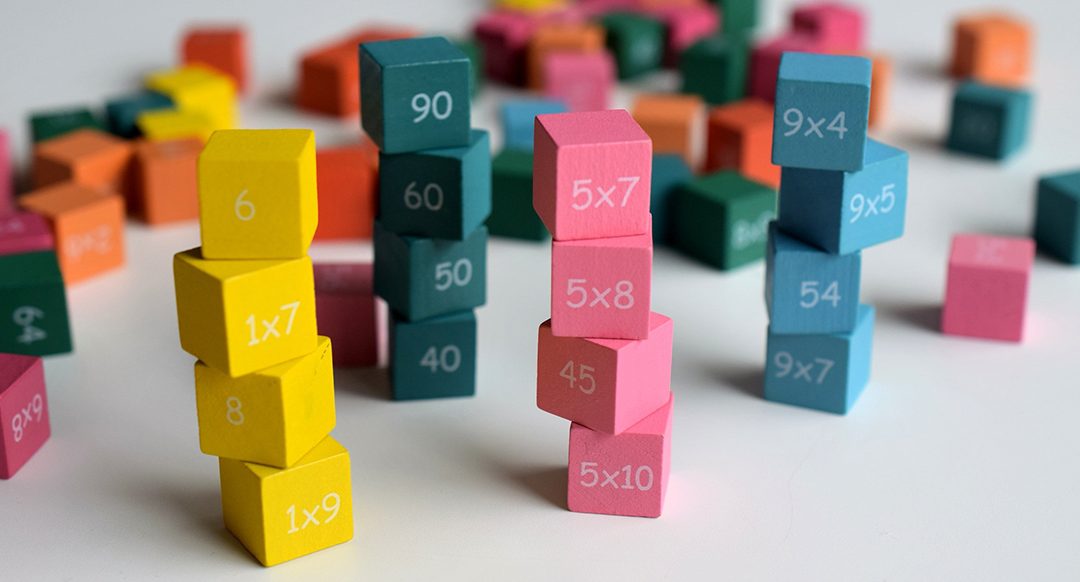 Despite popular opinion, math is not a creation of evil masterminds plotting the demise of students and mothers everywhere. I often get the feeling from comments I hear and read that many people think that math isn’t a natural part of our lives, that it’s boring and that it’s something that we just have to make our kids do simply because we’re expected to. None of these things is true—math is all around us! Just as we learn more about God through nature, music and art, we learn about God through math. It’s part of the world that He created!

I do understand that some people aren’t as strong in math as others, but even the least mathematically inclined of us can naturally include math in our children’s education. This way when they eventually sit down to a textbook, they already have a base of mathematical thought to build on, as well as a reason to want to learn it! Plain old arithmetic is very useful, but if that’s the be-all and end-all in math, it can be incredibly boring. If numbers only come up at your house when it’s time to drill the multiplication tables, any natural love of math in your child might be squashed.

The end goal of your child’s math education is not for them to be at or above grade level in elementary school! Your goal is for them to have a mind that can think math, enjoy math and apply math to their lives (and through all of these things, learn more about their Creator!). Keep focused on your higher aim and remind yourself that worrying about these benchmarks along the way could divert your path. If you lay a good foundation, speed can follow.

Up until my daughter entered second grade, I only used curricula when my kids asked for it. This year with my second-grade daughter reached a point where she needed to understand some of the mechanics of arithmetic before she could solve the problems that she wanted to solve. She was getting frustrated with trying to solve things without having the proper tools. Tools like the function of the tens place, carrying and borrowing (which are all really the same thing) are necessary knowledge. Of course, you can teach these without a book, but I like the way mine explains it. We now work on our second-grade curriculum once a week for about ten or fifteen minutes. She doesn’t drill problems—we just discuss the new concept and do a very few sample problems so that she can test her understanding. It’s not important at this point for her to work problems quickly—the important thing is to understand how to come up with the answer.

There are so many ways to live and enjoy math. I have listed some ideas for working math into your kids’ lives. If you’re mathematically inclined, these ideas or your own similar ones will come naturally to you. If you’re not, try to pick some of the ones that feel the most comfortable to you. If neither you nor your child enjoys any particular idea, then stop the activity! And here’s a tip for everyone as you do math with your kids: don’t assume that they are only capable of the simplest math—I’ve often been surprised at the answers my kids can come up with! Ask hard questions, and give them a chance—if they can’t solve it, help them think through it. 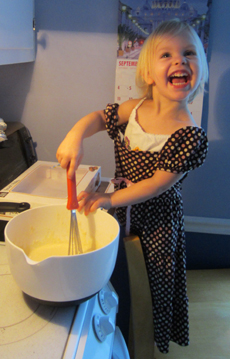 Baking with your kids is a great way to deal with numbers (plus teach some science and end up with yummy results!). One thing I started doing with my kids was giving them a one-half measuring cup (or even a fourth of a cup) to use instead of the full cup measure, simply because it was easier for them to fill. When I did this, I didn’t even think about the great math possibilities! I progressed from simply telling them “we need four of these” to “we need two cups, and that’s only half of a cup, so I need four of these,” to “we need two cups, and that’s only a half of a cup, so how many do I need?” Once, I was in a hurry and handed my five-year-old son a one-fourth cup and asked him to measure out eight of them—he immediately responded “so, we need two cups?” I have not been drilling this with him, and I do not think that he needs to know that yet—but isn’t it fun to be surprised by things like that? He understands the concept of a fourth of a cup, so to him it completely makes sense that eight of them make two cups! Also, vary the counting when you’re baking: start with having your child simply count the things you need—then progress to “Ok, we need six, but I already put in two—how many more do you need to add?”

Lunchtime is a great time to mess with numbers. When my kids ask if they can have crackers, I tell them that they can have eight, and they do the counting themselves. When there are only a few carrot sticks, I have one of the older kids divide up what’s left among the three of them. It’s gotten to be pretty natural for them to notice if there is a bad number to divide (“Oh no! There are eight left! What should we do? Mom, you’ll have to have two.”). Another thing that isn’t a natural part of lunch (but my kids love) is to have them “pay” for their lunch. I give them a random amount of change and then make up things that they have to pay me for (e.g., sandwich, yogurt, apples, etc.). I can make easier costs for the little ones and harder costs for the bigger kids. I also progress to charging them amounts for which they don’t have exact change, so they have to figure out how to pay slightly more and ask me for change. To be perfectly honest, this game can be a tad bit wearying to me (lunchtime is my time to be on the computer while they eat, so constantly having to come back in and charge money isn’t exactly my favorite thing to do). However, they really do love it, it’s gotten them comfortable with money, and it makes them comfortable with arithmetic!

Another math-and-money activity is allowance. My kids each have three jars for their allowance—one for their spending money, one to save for purchasing gifts at Christmas or birthdays and one for tithe. When I give the kids their money, they are the ones to split it up into the right jars with the percentages we laid out. I try to give it to them in different denominations at different times so they get used to more than just one way of splitting it up. I also often forget to give it to them for several weeks in a row, so sometimes they get to do multiplication (if one week is 40 cents in this jar, then four weeks is 160 cents). It gives them an added challenge, and it’s nice to have a good excuse for forgetting.

When your kids ask number-related questions, help them figure out the answers! This seems to happen a lot around my house—questions like “how old will I be when the baby is five? How long is it until we leave? When will I be six?” are great opportunities! Try to take advantage of everyday word problems! Here’s an example:

“And how old are you now?” Hesitation.

“Well, I don’t know if I count as seven or eight.”

After explaining that that’s a good question, and that since she turns eight next month, she counts as eight; we move on: 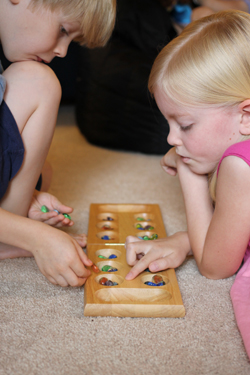 Games are wonderful for learning math! For young children, things as simple as Candy Land and Chutes and Ladders (though these are admittedly not the ones I most enjoy playing) are great for teaching counting, patterns and turn-taking. As your child gets older, there are plenty of excellent games to keep them stimulated and thinking! Some games are better than others, as is true with everything, but almost any game involves some sort of strategy. Some fun games deal directly with math, and there are plenty of games that don’t seem math related but are excellent thinking games. Also in the game-like category are solitaire games and workbooks. These are some of my favorite things ever!

ThinkFun puts out many wonderful solitaire games that my kids love—I highly recommend any of their stuff. My favorite workbooks are those put out by Critical Thinking Company and Tin Man Press. My kids love to do them, and I’m thrilled with the types of thinking that they teach. Check out the resources in this section for some ideas on specific games and workbooks. And don’t underestimate the value of puzzles! The spatial reasoning used in putting together a puzzle is more difficult than we realize. Some children, like my oldest two, can do it naturally, so I never really thought of doing puzzles as a big learning experience. But when my third child started trying to do puzzles, I was amazed at how little she understood the concept of placement in the picture or how the bits of a picture go together. She tried to put the dog’s head on the end of its tail, or the doll that’s on the right side of the picture all the way over on the left! She enjoyed trying to do the puzzle with me, though, and the more she did it, the better she got at it. Separating the edge pieces from the interior pieces is also great sorting practice!

Maybe the ideas above aren’t in your areas of interest. Can’t stand baking? Get bored by games? There are plenty of other areas where you can find math. In music, count beats or talk about note duration and time signature. In art, talk about parallel lines and shapes or learn ratios while mixing new colors. In nature, look at symmetry and have your little ones count petals on a flower or points on a leaf. For sports, there are lots of numbers in scores and time keeping, and brackets are charts! Keep an eye out for math; it’s everywhere!

Alexa Carter, a homeschool graduate herself, and her husband, Daniel, live in Durham and homeschool their four children, ages ten months to almost eight years. She has coached award-winning homeschool MathCounts teams and taught math at various levels over the past twelve years.

Are you looking for more information on homeschool math? Check out our interview with Steve Demme. Steve is the founder and creator of Math-U-See, Demme Learning, and Building Faith Families. He is also a featured speaker at the 2021 NCHE Thrive! Conference. Equipping you with homeschooling resources is our mission! Support our work when you become an NCHE member.