Searching for something fun (and shhh…educational) for your family to do this summer? Why not try filmmaking?

That’s what the homeschool family of Gary and Shannon White of Cliffside did. However, their summer project turned into a year-long endeavor. Their oldest daughter, Aerin (sixteen) chose cinematography as a high school elective. She then directed a sixty-seven-person cast to make the first full-feature 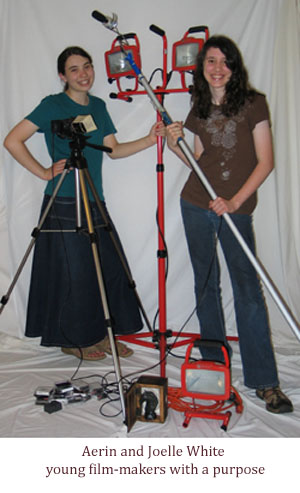 Christian film that she has written, After the Knight. The story is about a family facing the foreclosure of their farm and a greedy neighbor who will do almost anything to obtain it. The main character, Kirk Decker, and his teen friends stumble onto a mysterious treasure hunt. A series of surprising events unfold, offering hope, danger and dramatically changing everything.

When the script was finished, Aerin began emailing her friends and family, requesting warriors to pray and volunteers to act.

The Whites did not use a movie-making curriculum but learned mostly by trial and error. Some of the equipment used was iMovie, Final Cut Pro X and a Canon HV 30 video camera. Aerin’s father, a pastor and high school teacher, invested his free time doing the filming and editing.

Making After the Knight was definitely a family affair. All seven of the White children took part in the filmmaking. They acted, helped make sets, prepared meals for the cast and assisted with childcare for cast members. Extended family, friends and church members all gave of themselves to make Aerin’s story come to life.

Filming took place in numerous locations in Rutherford and Cleveland counties. The majority of film production took about four months in 2011. Editing took over a year before reaching completion in 2012.

Making a movie was a great learning experience but it was not always fun. Before the project was complete, numerous obstacles were tackled; everyone’s patience was tested; and the $1,000 budget had tripled. Aerin continuously kept all her prayer partners posted with prayer requests and praise reports concerning the film.

When asked to name the most difficult thing they encountered during filmmaking, Aerin answered, “Our own inexperience has made this project difficult. At times, we had trouble working around everyone’s schedules and keeping ourselves and everyone else motivated!” Her sister, Joelle, who assisted greatly in the filming, added, “Being hot and tired, and still having to act energetic for the filming [was difficult]. After a long, tiring day, we would get in bed late and have to wake up early. We also had to deal with stinging yellow jackets!”

The girls are quick to share the good things they have learned as well. “I learned how to write a script,” Aerin said, “and use the filming equipment. One of the biggest things I learned was how to work with people, especially in stressful situations. God has used the filmmaking process to teach me patience and to extend grace to others.”

Joelle said she became better at organizing and communicating more clearly. “I’ve learned film editing and how to use voice recording programs as well as how to operate a camera and boom microphone.” 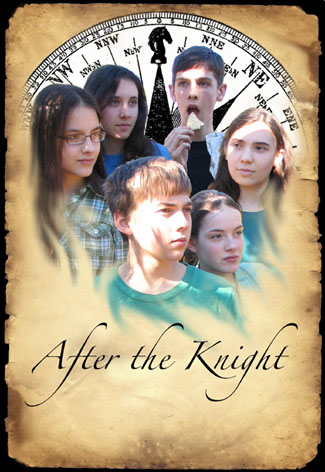 When asked what she wants people to take away from After the Knight, Aerin answered, “I want people to realize God is ultimately in control. We have to give the things in our lives to Him, faithfully do what He has called us to do, and trust Him with the results.”

The final hurdle was to obtain an original music score for the film. The Lord provided two talented former homeschoolers: Samuel Jenkins and Jacob Searcy, both of Rutherfordton.

Hundreds of hours of hard work were encompassed in the film. Technical difficulties were rampant but the Whites persevered. They recently held a private debut of After the Knight in their community. Enthusiastic reviews prompted the family to enter the film into a Christian film festival that is taking place this fall.

The family has set up a website at www.aftertheknight.com, that includes the movie trailer, background information and makes the family-film available to the public.

Joelle and Aerin have advice for other young filmmakers. “My best advice is to pray over whatever you’re doing. Prayer is powerful,” Joelle said. “Get adult help. We couldn’t have done it without Daddy and other adults. Don’t make things hard on yourself. Stay within budget, keep props easy and learn your equipment.”

Aerin adds “Pray and seek God’s will in all you do. Start simple. Think through your scenes; plan when and how you are going to shoot them. Don’t rush. Take time to get good performances and plenty of footage to work with and enjoy the process!”

Do you think your family might like to try making a movie this summer? It doesn’t have to be a full-feature film. You may try something simpler. Perhaps you might retell a story you just read, or a story you have written. Maybe your family would like to film a short clip promoting an upcoming event at your church or film a positive message of hope for other media outlets. Record a legacy by interviewing relatives on camera. The ideas are plentiful (and educational) so have fun with it. “Lights, camera, action!”

Sally Matheny’s mission in life is encouraging others. She enjoys “reflecting on ordinary life under God’s extraordinary Light.” A member of SCBWI and ACW, her articles appear in children’s magazines Clubhouse Jr., Appleseeds, Keys for Kids and others. Sally also writes about parenting, homeschooling and Christian living for Practical Homeschooling, GREENHOUSE and Homeschooling Today. A former public school teacher, with an M.Ed., Sally is currently in her sixteenth year of homeschooling. She serves on the Write2Ignite! Conference team and enjoys teaching writing classes for homeschool co-ops. She and her husband make their home in western North Carolina. They are blessed with three children and one son-in-law. Connect with Sally on her blog: www.sallymatheny.blogspot.com, on Facebook and twitter.