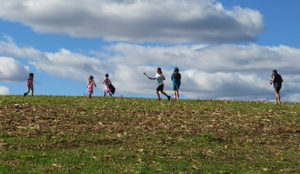 Last week gave us a spring preview here in the Catawba Valley area. Birds were singing the praises of the nest they had begun constructing under our eaves. The sun was shining brightly in every window, enticing us to come out to play. Crocuses, daffodils, and hyacinths were poking their sleepy heads out of the ground, asking if it’s time to wake up from their winter nap. Of course, the children wanted to spend every minute they could outside. Who wants to write vocabulary sentences or learn about dividing with decimals when the world is appealing to their hearts to come explore? And we all know that falling on the heels of spring preview is a return to the cold drudge of winter. What’s a homeschool mom to do?

This particular homeschool mom has several tactics that have been tried over the years.

Experiment 1: You can fight it—be a stickler and keep everyone at the school table until all pre-assigned work is done.

Observations: No one really learned much of anything, everyone felt the frustration, and a world of learning opportunities passed by untouched.

Experiment 2: A compromise—send everyone out to their hammocks with an armful of books. At least some schoolwork will get done, and they still get to enjoy the warm air.

Observations: Everyone enjoyed swinging in their hammocks, maybe a bit too much! It took much longer to get lessons completed, and math was a total loss. Some books were accidentally left outside overnight and got water damage when it rained. Truthfully, hammocks are the second most common place to do schoolwork here anyway, so it wasn’t as much of a compromise as I had intended. They still longed to leave the bookwork to run through the cool grass in their bare feet, dig into the thawed ground, splash in the puddles remaining along the driveway, and identify every birdsong that hit their ears.

Experiment 3: Open the doors, maybe the windows too – and let the children explore! The books can wait for winter’s inevitable return.

Observations: As I followed them along a path of discovery, the unbridled children learned much more than they would have inside at the table, squirming to get outside. First, they asked for help determining what type of bugs had amassed at the left side of the chimney. (Boxelder bugs swarm as they seek south/southwest facing areas to overwinter.) This led to an analysis of which direction the left side of the chimney is facing. Surprise—it is southwest!

We talked about why some plants in the flower beds remain green, others are dead and brittle, and others have

mysteriously appeared peeking through the mulch where they had been long forgotten. This led to researching what kind of care various plants need at various times of the year, which plants grow from bulbs and how to force them, stating a hypothesis on what will bloom from each bulb, and a work party organized to trim back the hostas, ornamental grasses, and dead flowering plants to prepare the bed for spring growth. One child asked if she could harvest the seeds from the brown-eyed Susan (Rudbeckia triloba), which reminded us of why we use Latin for scientific names.

We made plans to talk later about seed preservation and germination. We noted what plants grew well in their locations and which one got a little leggy as it struggled to reach the sunlight it needed. We marveled at the amazing power of a tiny, seemingly weak strand of a trailing ground cover plant whose tentacles had completely destroyed our garden ledge as it pushed its way through the mortar. Tonight, we will pore over the Baker Creek Heirloom Seed catalog to plan some new additions to our yard. The children have learned today to carefully select shade-lovers for the bed under the front awning, some that thrive in full sun to accompany the Rudbeckia, and a non-trailing morning sun lover for the east beds. 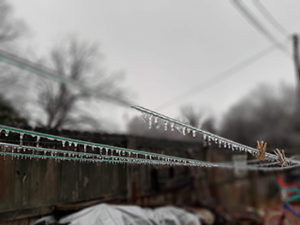 Winter weather will soon return with a vengeance, and we will return to our workbooks, maps, and reading materials. As the winds rattle the naked branches on the trees outside, we will snuggle together on the sofa to read The Long Winter, shivering with empathy as the Ingalls family twists wheat stalks into bundles for their stove. We love the short breaks of sunshine and warmth but appreciate the coziness of studying in a warm house with a hot cup of tea while the rain pounds on the roof overhead.

To everything there is a season, and a time for every purpose under heaven. Ecclesiastes 3:1