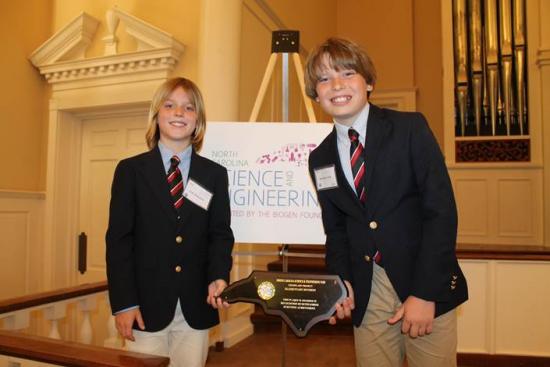 Davidson Good, age eleven, and Joshua Robertson, age eleven, both of Wilmington, received exemplary status and were named winners of the International Science and Engineering Fair at the elementary level for the state of North Carolina. Their award-winning project, “Sweet and Salty Dreams: Will Taste Affect Human Heart Rate?” tested human heart rate that followed ingesting a series of food flavors in an effort to recommend appropriate bedtime snacks for children who need to gain more sleep by achieving sleep sooner at night. Subjects were tested using the palpation method on the radial artery. The young scholars followed all ISEF rules concerning proper safety requirements and documentation with their project. After winning at both local and regional levels, they competed at the state level among eighty-one other competitors, presenting their project with both oral and written reports to a series of ISEF judges. As elementary winners, Good and Robertson achieved the highest level of honor attainable. Good and Robertson were the only homeschooled students at the 2016 fair. The event was held April 2, 2016, at Meredith College in Raleigh. Both students have been homeschooled since kindergarten and have been in the same homeschool group for seven years—Classical Conversations, directed by Good’s mother. The young men are involved in volunteer work, church work, music and sports—including basketball for Robertson who plays for the Wilmington Basketball Center Elite team, and soccer for Good who plays for the Wilmington Hammerheads 2004 Elite White team. Both boys are avid readers and pianists and spend their free time playing with their siblings. Davidson is the son of Ashley and Gina Good, and Joshua is the son of James and Monica Robertson. The families of both boys give all glory of this award to God.