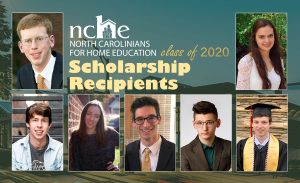 Since 1998, NCHE has awarded over $150,000 in college scholarships to over a hundred graduating homeschooled seniors. The NCHE Scholarship Program was instituted to encourage and reward excellence in homeschooling in North Carolina. Scholarship categories include:

This year, there were some truly amazing applicants! Although it was not easy for our committee to choose, after much prayer and consideration we selected the following students. On behalf of the scholarship judges on the NCHE Activities Committee, it is my privilege to inform our members of this year’s award recipients.

Apologia Missions & Ministry Scholarship:  JOSIAH BRINSON of Holly Springs, son of Clifton and Christi Brinson. Josiah plans to study physics at Wake Forest University before going on to earn engineering degrees where he can use his creativity to invent and design. He is among the top 2% of under 21 chess players in the U.S.

Apologia Missions & Ministry Scholarship #2:  WILLIAM SANDFORD of Burlington, son of Bill and Cheryl Sandford.  William has been involved in the Civil Air Patrol for four years including serving as Squadron Commander; participated in four domestic missions trips and been a music/worship leader in his church for six years.  He is on-track to receive his Associates degree from Alamance Community College this spring where he started and led a Bible study for approximately 25 students on campus.  He plans to attend Liberty to major in Bible Studies and Music with the anticipation of entering the ministry upon graduation.

Arts Scholarship:  ADAH FREEMAN of Kernersville, daughter of Karl and Mary Freeman.  She has a 35 on her ACT.  She plans to attend either UNC-Chapel Hill or NC State University in their bio/pre-med program.  She has “a passion for biology, mental health, and any kind of art.”  She  “may become a doctor, a dermatologist, a Physician’s Assistant, an art therapist, or even a medical illustrator, but whatever I do will involve service, science, empathy, and creativity.”

Molly Nichols Memorial Academic Scholarship:  ELI MAYFIELD of Wake Forest, son of Jeffrey and Adrienne Mayfield.  Eli, one of nine children, has a goal of becoming a nurse through the nursing program at UNC – Chapel Hill. Subsequently, he expects to go to grad school to become a nurse practitioner or PA.  Eli has a 35 on his ACT, is nationally ranked in speech and debate through NCFCA, loves his family and loves the Lord.

Community Service Scholarship #1:  SOFIA LONNECKER of Knightdale, daughter of Gregory and Jacqueline Lonnecker.  Sofia has served as an officer in her honor society, been active in her church, run cross country, worked with horses, and filled many positions in theater, including designing and making historically accurate costumes; see the link below. She wants to lead young girls through horsemanship.

Community Service Scholarship #2:  BEN McKAY of Youngsville, son of Trevor and Janet McKay.  Ben is very well rounded and academically gifted.  He has an ACT of 33 and will complete his AA degree via dual enrollment this spring.  He has held leadership positions in his honor society and with NCFCA; earned the President’s Bronze Award (2 years) for community service and participates in guitar, voice, ballroom dance and musical theater.  He plans to attend Grove City College to study Computer Science. Because of his breadth of interests and abilities, he doesn’t have a single career in mind but says, “I don’t need to see to know that the Lord sees. Whatever happens, I trust Him.”

Scholar Athlete Scholarship:  JACOB HUTH of Raleigh, son of Brandon and Cheryl Huth.  In addition to high scholarship, he has a wide range of extracurriculars that include his church, trumpet, “for fun” classes (that weren’t on his transcript) in CPR, personal finance and auto repair among others.  And then there’s his sport: fencing.  He is nationally ranked as a competitor at the National Junior Olympics as well as serving as a fencing coach and referee. He plans to attend NC State University to study biomedical engineering, having been inspired by one of his fencing coaches who has a prosthetic leg following an accident.

Scholarships are funded by supporters like you.  If you would like to donate to this scholarship fund click here.
*The Missions & Ministry Scholarship is sponsored by Apologia.