Do you love children? Of course, you do. That is one of the reasons you are homeschooling. Is there a nagging thought in your head or a tugging in your heart that you should grow your family through adoption? Why in the world would you think about adopting a child when you already feel overwhelmed with phonics, multiplication tables, piano lessons, swim practices and getting enough time for yourself to maybe exercise a couple of times each week? Do you believe you are that awesome of a parent that you are going to go out looking for an even bigger challenge? I guess your birth children get along so well that, hey, what’s one more? Maybe it’s because you are meeting all of your financial goals at this point in your marriage and you have no idea what else you should do with these buckets of money? My husband, Howard, and I asked each other these questions and more back in 2003. Ok, so those weren’t quite the questions we asked ourselves. We really didn’t think we were awesome parents, or that our birth children were getting along so well, and we certainly didn’t have buckets of money sitting around. So, what were we thinking when we actively pursued adoption?

Earlier in our marriage, God had blessed us with seven birth children, so my childhood desire to adopt was shelved for about twenty-five years. After taking a rational inventory of our lives, we decided that we would instead become foster parents to newborns with a local adoption agency. (Did I say rational?) Through the course of our foster parent training, we learned that there are millions of children worldwide who have lost both of their parents. That childhood desire to adopt returned as we joyfully placed each of our foster babies into their forever parents’ arms. These babies were heading to homes of love and would have hope and a future. At forty-eight and forty-nine years old, Howard and I were not thinking of adopting a baby, but the desire to reach out to an older child was beginning to press in on our hearts.

It seemed at the time that our lives were full of blessings in every area and that, in comparison to almost every other person in the world, we were filthy rich! Were we ready to make some sacrifices for the sake of trying to love others like Jesus would? Could God have given us seven children to teach us to reach out to two brothers by birth who had no future? If we were telling our children that we were pro-life, could it also mean that we were to show them that we valued all children, not just squishy, adorable babies? In adopting, we hoped to be a blessing to the children who would become part of our family, and we hoped that in being more other-focused, we and our birth children would have more compassion for all the suffering people in the world. 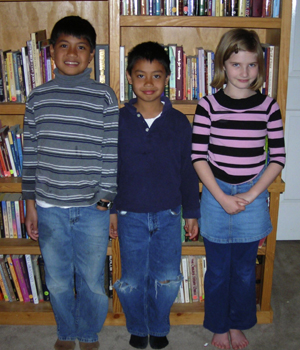 After ten months of reading books on adoption, praying, seeking advice, and filling out a mountain of paperwork, we traveled in October, 2004, for twenty-seven hours to an orphanage in the Philippines to pick up our two sons who were then nine-and-a-half and seven-and-a-half years old. We were embarking on the biggest step of faith of our lives. This commitment to become parents to these boys, sight unseen, was much more monumental than our decision to be missionaries in Kenya with our first three kids. This commitment was being made to two strangers. Yes, just like we committed ourselves to each of our sight unseen birth children, we committed to these boys, but with the knowledge that these two boys who were joining our family forever have suffered the worst trauma a human can undergo—the loss of their birth parents.>

Along with losing their birth parents, when we adopted them, they also lost all their friends and house parents. They left behind a mangy dog with puppies. Yes, they left behind poor health and dental care, no education and the prospect of being back on the street when they turned sixteen years old, but they also completely left their country with its sights and smells, its language and traditions. How their losses would later impact each of us, we could not even imagine. Unless we have been adopted internationally, we have no idea what this is like.

When our boys came home to live with us, they were expecting Disneyland. The orphanage had used the television to pacify them, filling them up with Disney movies and American TV shows. They were angry that they were not allowed everything they wanted at stores (“Americans have everything they want”) and were incredulous that they would have to do chores like the rest of our kids. Not knowing whether this huge stash of food in our fridge and pantry would be there the next day, they hoarded food in their rooms. Along with having fairytale expectations, they did not expect to have to do any schoolwork. Period. Were they ever in for a shock!

We chose to homeschool our two new sons primarily because we had been homeschooling our birth children since they were born. Homeschooling encompassed education, parenting and spiritual discipleship for us. In 2004, we still believed that if we “did a good job” as homeschooling parents, we would not have to deal with rebellious teens and would be able to see all of our children become productive, educated and compassionate Americans, who loved Jesus and wanted to live for Him. In addition to our outcome-based philosophy with our birth children, we identified some other reasons to homeschool our sons who had been adopted.

If you are considering adopting a child beyond the baby/toddler stage, maybe you would benefit from what we have learned in our last eight years of homeschooling our sons who were adopted.

Adoption is a big commitment and the decision to adopt should be taken seriously. Homeschooling an adopted child is possible, but may have additional challenges. Doing what is best for your family, including your adopted children, takes precedence.

Alice Guthmann has been married to Howard for almost thirty-five years, is the mother of five sons and four daughters, is the grandmother to two (soon to be three!), has been homeschooling for twenty-nine years and is thankful to be an adopted daughter of the King of Kings.