Many children have fantasized about getting up the warped wall as the crowd chants, “Beat that Wall!” on the American Ninja Warrior (ANW) television show. But that’s only a dream—or is it?

In 2018, NBC’s Universal Kids chose 192 children, ages nine to fourteen, to compete in season one of American Ninja Warrior Junior. Two NC homeschoolers were among them: Joshua Auer, aka “The Bathrobe Ninja,” and Sammy Bainbridge, aka “The Ninja Farmer.” There were also other homeschoolers on the show.

One typical challenge for homeschoolers has been providing physical education for their students. In some areas of the state, competitive homeschool sports teams are available. There are also plenty of rec. leagues, some better than others. 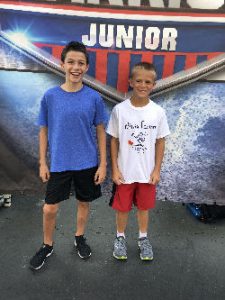 But what about those kids who seem to have springs on their bottoms and just need recess to get out their energy one or more times a day? A growing number have found ninja warrior style obstacle training to be a great individual sport that fits their homeschool lifestyle. They have also found an encouraging community that welcomes them.

All you really need to prepare for your first ninja warrior event is a pull-up bar. Many obstacles need upper body strength and grip strength. Dead hangs and pull ups get you ready. You can put an inexpensive, but solid, pull-up bar in your child’s bedroom door frame if there isn’t one somewhere else in or around your home. And regularly walking across a 2×4, or other homemade obstacles that develop your balance, will give you a leg up on other beginners.

Many ninja warriors have adapted old swing sets or built their own rigs little by little with treated lumber and various eye bolts and raw material found at any hardware store. Others have taken over parts of barns, bonus rooms, and basements to build their little home ninja gyms. You can find various rock climbing holds or other obstacles online to add to their rig.

Both Joshua and Sammy do most of their training at home. Their moms find that the boys can concentrate more on their schoolwork with short breaks. They are also more motivated to get the rest of their academic work done so they can do their larger workouts. Joshua typically works out two to two and a half hours per day. Sammy and his siblings frequently spend their afternoon free time hanging on and swinging around the various obstacles they’ve put up in the backyard barn. It is amazing how much physical education can happen at home.

A lot of fun and exercise and skills can be had at home, but eventually, your kids will want to scale their first warped wall, land that jumping spider, or check out a salmon ladder or rumbling dice.

More and more entertainment centers are popping up around North Carolina that have some decent obstacles. To really get into the sport, however, you’ll want to find a ninja gym. North Carolina is home to some of the finest. Although many of the first ninja gyms were designed by adults for adults as ninjas gathered together to find a place to train between ANW seasons, that has quickly changed.

Just about every ninja gym now caters to the younger ninjas and offers a variety of programs from punch cards, to weekly training sessions, to one-time open rig sessions. Though you won’t fall into a lighted pool if you miss the obstacle, you’ll find many of the same obstacles you’ve seen on the show, and many are adapted for those smaller in stature. And, yes, mom, there is plenty of safe padding underneath the obstacles. It is statistically much safer than football, soccer, basketball, and many other sports. Each of these gyms has something tailored for or inclusive of homeschoolers.

If you have ever watched American Ninja Warrior, you have undoubtedly seen ninjas cheering on their competitors. You are entering a community when you join the sport. It is generally understood that your only opponent is “the obstacles.”

One of the reasons many people homeschool is to avoid much of the negative peer pressure and constant immersion in a self-centered, age-segregated environment. The competitions are arranged by age groups, but you will find that many of the ninja warrior competitors don’t just come during their allotted time but come early and stay late to cheer on the up-and-coming, or to study the people who are more advanced.

Competing children have often met and had conversations with a lot of the stars you see on the show. There is something about the sport that just seems to breed encouragement like no other sport I’ve seen. It is an individual competitive but cooperative sport. I’ve overheard parents tell the kids, “You guys aren’t just pioneering a new sport. You are changing the world.” It is so rare to hear anyone bad mouthing the judges or the other competitors. Not all the people in the sport are saints, of course, but there is an unusual sense of openness among them.

Most competitions are on the weekends, but you certainly don’t need to dedicate every weekend to it. You can typically travel as much or as little as you want. We’ve met many who do most of their training at home and come to gyms to compete only a few times per year.

Instead of having your weekly schedule set by the team(s) your children are on, you can determine your own travel and include as much of your athletic family (and the family cheerleaders) as you would like. It is not uncommon to go to a competition and see multiple children (and sometimes parents) compete at the same gym on the same day. Many make it a fun getaway by looking at the league schedules (there are three significant Ninja Warrior Leagues) to find competition dates and locations.

Joshua was interested in trying to qualify for the National Ninja League championship finals last season. We looked up the schedule and found that there were several league qualifiers in New Jersey where my sisters live. We decided to make it a dual-purpose trip. How many other youth sports can you make such a custom personal decision like that?

But, you don’t have to travel far. Ultimate Backyard Warrior hosts the most amazing Ninja Warrior events in the country on Memorial Day and Labor Day weekends in Rocky Mount. They provide live music, barbecue, shaved ice, and more. Beginner and advanced courses are there for fun or competition. You’ll meet some of the biggest stars in the ANW world. The Bainbridge family had four children competing among a dozen or more ANW Jr. competitors. Unlike just about every other ninja gym in the country, there is a set of obstacles with water under them. This also served as a place of baptism for twenty people last Labor Day Sunday after “Ninja Church” and a place to cool off when the competition is over.

If you have had less than pleasant experiences in a team sport or rec. league where it took over your life or embodied the kind of environment you’d choose not to be in, consider the sport of ninja warrior. Join the growing group of homeschoolers that have found it to be a sport in which they can thrive and serve. It’s a great place to be “in the world (of competitive sports), but not of it.”

Ken Auer and his wife, Carol, live in Holly Springs and have homeschooled their children (twenty-six, twenty-two, and thirteen) since 1997, the same year he started the company, RoleModel Software (http://rolemodelsoftware.com). He has been an occasional speaker at NCHE conferences and other homeschool venues. RoleModel Software is a world class custom software development company that trains up its own software craftsmen through apprenticeship starting with their Software Craftsmanship Academy (http://craftsmanshipacademy.com) which has included many homeschoolers. In 2018, RoleModel Software built Ninja Master software (http://ninjamasterapp.com) to help take the obstacles out of running ninja warrior competitions.