Teaching the Constitution and Civics is no longer held in high esteem in our nation, which is why I began teaching “Foundations of Freedom” back in 2011. This workshop provides an overview of how our nation was founded, what principles it was founded on, how our government is supposed to work, and our place in the whole picture as Christian citizens of the Kingdom of God as well as the United States of America. 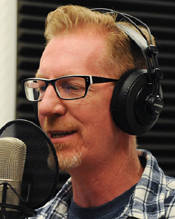 Steve Noble is the host of The Steve Noble Show (formally Called2Action Radio) which ihas been heard across NC since 2007 and nationally syndicated since 2015. He is the teacher of Foundations of Freedom (in-person and now online), a constitution/civics course for high school homeschoolers. He is the director of national mobilization for Harvest America, a nationwide evangelistic outreach featuring pastor and evangelist, Greg Laurie. Steve and his wife Gina have been married for twenty-five-years and have four children. They have been homeschooling since 2002.