Are You Considering Military Service?

Preparation for the successful pursuit of any form of military service is a long-term endeavor as our shrinking military has high moral, academic and 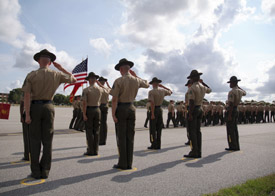 Graduation of Marines from Parris Island 02

physical standards. While recruitment standards do vary in response to the needs of the Department of Defense, per a 2013 DOD study, only twenty-nine percent of seventeen to twenty-four year-old Americans even qualify to serve. Requirements to serve as an officer normally, almost always, include a college degree. According to the “2013 Demographics Profile of the Military Community,” officers comprise 16.6 percent of the total military force. Competition for service academy admissions (full-ride scholarships) and college-funding ROTC scholarships is keen and the formal journeys normally start in the spring of a student’s junior year of high school, culminating with final selections in February or March of the year of entry.

The first step in the military academy application process is to determine basic eligibility: a U.S. citizen, of good moral character, unmarried with no dependents and at least seventeen but less than twenty-three by July 1 of the year of entry. Before requesting and completing a pre-candidate questionnaire, aspirants should familiarize themselves with the entry process and requirements of the specific academy in order to consider the level of competition, as the academies seek evidence of well-rounded leadership, academic and athletic abilities.

Regarding academics, academies do place a greater weight on standardized test scores of home-educated applicants due to the absence of graded coursework and/or peer comparison. Curriculum should follow a typical college preparatory model with emphasis on English and math. Average SAT scores of those gaining admission to a military academy are in the mid to upper 600s in both verbal and math categories. Mean ACT scores are about 29 to 30.

Athletic participation is an important indicator of an applicant’s potential. Suggestions for the home-educated include club or individual competition in swimming, tennis, gymnastics, baseball, basketball, track/cross-country and 5K road races. During the competition for admission, a candidate fitness assessment (CFA) will measure and evaluate a candidate’s potential. The assessment, completed in less than forty minutes, will include two minutes for each of the first five exercises, with three minutes rest between each, followed by a one-mile run. Average CFA scores of those gaining admission to the various academies are similar. 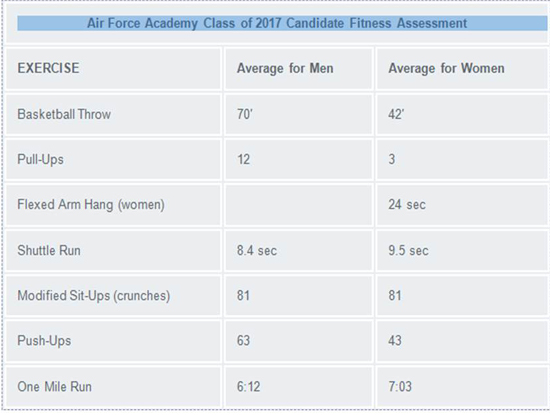 A military service academy appointment also requires a nomination, the majority of which are from the Congressional or Vice Presidential categories. While a nomination does not guarantee an appointment, no appointment can be offered without a nomination. For nomination processes, contact or refer to the website of your senator or representative, or search for academy nominations at http://www.whitehouse.gov.

Even without a scholarship, students can enroll in ROTC at schools that offer it and compete for other-than-four-year ROTC scholarships. While acceptance of a scholarship will entail a military service commitment, taking ROTC classes alone will not. Standards for acceptance to an ROTC program are obviously not as high as the scores required to obtain a scholarship. Completion of ROTC training requirements or completion of Officer’s Candidate School after college graduation, acceptance to which is more competitive than ROTC, may lead to a commission as an officer, depending on how well the student performs in the programs.

While the preceding information highlights paths to funding a college education enroute to a commission as an officer, the commission itself, or enlistment in the military without a college education and commission, are worthy endeavors that offer many benefits. The same considerations for attaining appointments and scholarships are good indicators of future success in ROTC and military service, including special operations.

Consideration of a military enlistment should also involve significant preparation and consideration of available programs, especially if the desire is to serve in a specific capacity such as Special Forces. Review recruitment material, seek wise counsel and prayerfully consider decisions leading to such a commitment.

As military service does include inherent risk, stress and enormous responsibility, seeking military service should be in response to a perceived call, a sincere desire to serve or at a minimum, individual acknowledgement that the benefits are worth the cost.

Note that the information presented indicates the standard or typical paths to the most competitive military service entry points. There are many other avenues. An individual with an extreme desire to serve, not barred for medical, substance abuse, aptitude or conduct reasons, can overcome most other obstacles to service.

Jonathan Paul Shockey, Lt. Col. (USAF retired) and his wife, Joy, are the homeschooling parents of Savannah and Landen. When Savannah was two years old, they accepted an invitation from Joy’s sister to attend the 2001 NCHE Conference. By the end of the conference, they knew that homeschooling was part of God’s plan for their family. After actively homeschooling while living in Arkansas and Germany, the family now resides in Sanford. Jonathan is currently an operations supervisor at Pope Army Airfield and serves as NCHE region 6 liaison.